WHO IS AUGGIE NAVARRO? 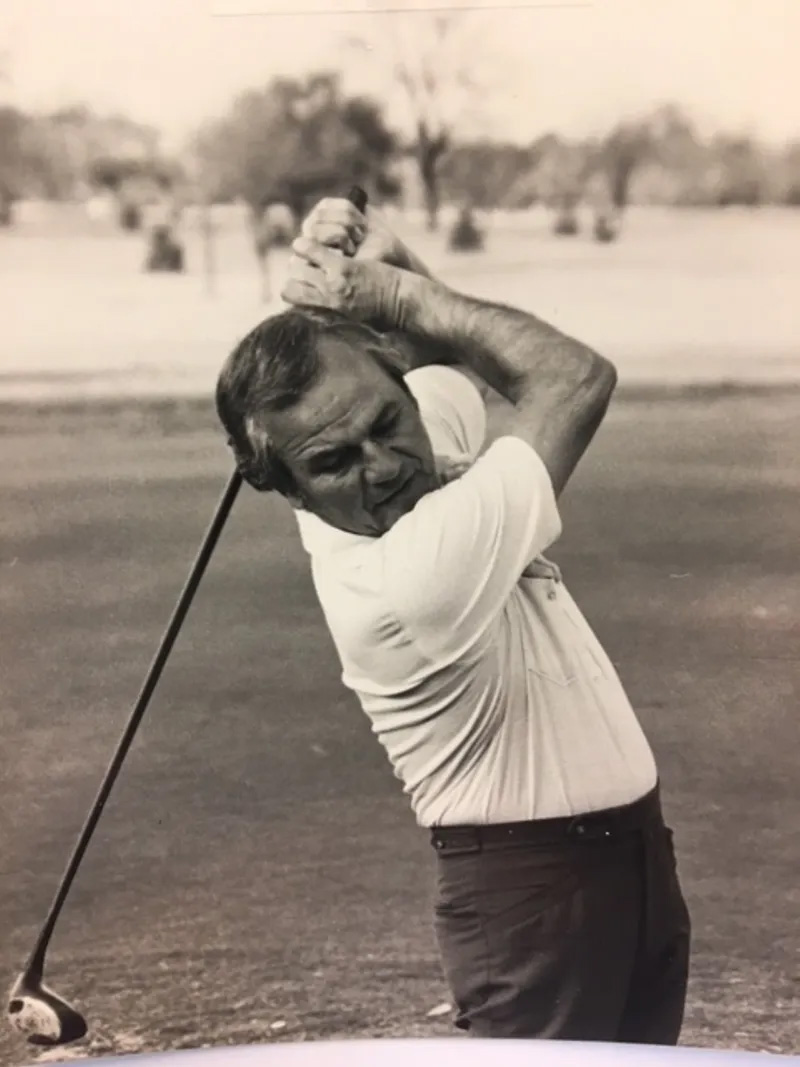 Auggie and his nine siblings came from humble beginnings, raised in a pair of boxcars given to their father as a retirement gift for years of service in railroad construction. Many of the Navarro brothers began caddying at young ages to help support the family. This would be Auggie’s introduction to the game of golf.

As a caddy, he would earn 90 cents per 18 holes at Crestview Country Club (now Braeburn Golf Course), often carrying bags for two golfers. The Wichita Beacon hosted an annual caddy tournament, sponsoring the winner to play in a national caddy championship. Navarro won his first event at the age of 17, which qualified him to play in the National Caddy Match Play tournament in Columbus, Ohio. As a member of the highly talented North High Golf Team, which would produce four future PGA professionals, Navarro continued to refine his game. 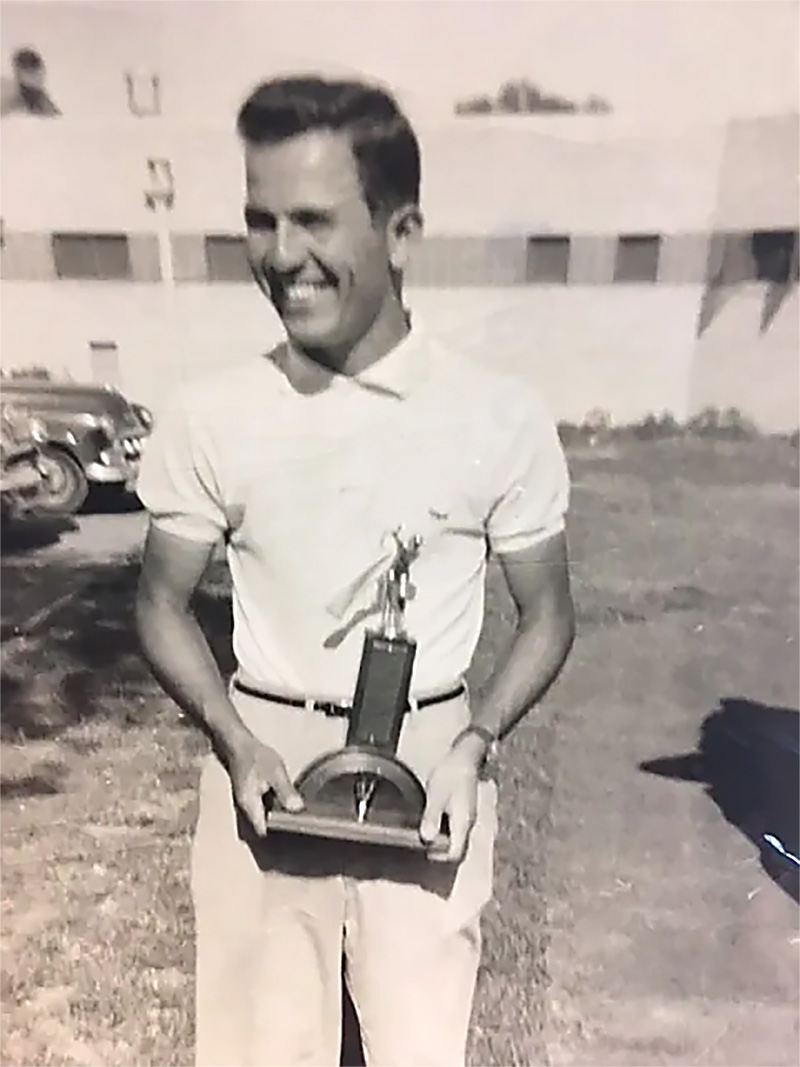 By the mid 1950’s, the name Auggie Navarro had become commonplace among Wichita golfers. During his amateur years, he consistently posted victories both locally and at the state level. His first city victory occurred in 1954, winning the match play event. In 1956, he posted victories in three of the city events: Men’s City Match Play, Medal Play, and 4-ball. In 1958, Navarro won the city 4-ball for the second time, helping initiate his golf career as an assistant professional at MacDonald Park Golf Course.

On February 15th, 1962, the City of Wichita hired Navarro as the Head Golf Professional at Sim Park Golf Course. In this role, Auggie began to share his passion for the game with young golfers through the Wichita Junior Golf Program. Two years later, Navarro became a member of the South Central Section PGA and posted professional victories throughout Kansas, Oklahoma, and part of Arkansas, with his wife, Donna, by his side. For over three decades thereafter, Navarro consistently recorded victories throughout the Kansas Chapter and the South Central Section of the PGA. During these years, if he wasn’t playing in tournament events, then he was sharpening his golf skills around Wichita, regularly playing in the 10:30 group, or “The Gang” as they called themselves. 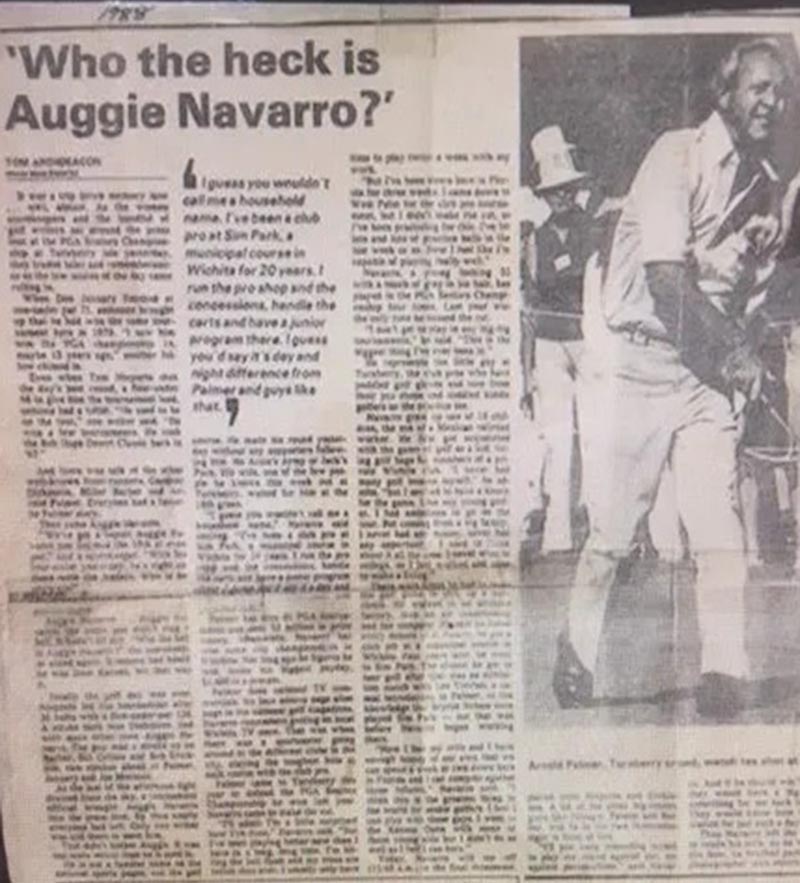 On July 30th, 1982, at 53 years of age, Navarro scored a career low 57 at Sim Golf Course, tying the U.S. record for low score and earning a place in the Guinness Book of World Records.

In 1983, Navarro elevated his goals and began trying to qualify for Senior PGA tour events. By year’s end, he was ranked 94th on the Champion’s Tour – Senior Career Money Leaders. That same year, he was the runner up in a Senior PGA event held in Carmel, California. In 1984, he had his first hole-in-one while playing at a PGA event in Denver, Colorado, winning a new car. A second hole-in-one came in a PGA event in Hilton Head. In 1986, a Tucson, Arizona Senior PGA Tour event, Navarro was again runner up, ranking once again within the Champions Tour – Senior Career Money Leaders Top 100 in earnings.

One of Navarro’s more prominent professional highlights came in 1988 where he led mid way through one of the Champions Tour Senior events held in Florida. The local newspaper published a headline in the sports section titled “Who The Heck is Auggie Navarro?”, focusing on Navarro’s lead over fellow participant Arnold Palmer.

In 1992, Navarro was honored with meeting Ben Hogan as an appreciation for 30 years of partnership with the Ben Hogan Staff brand of golf clubs. Navarro retired on January 1st, 1994, at the age of 65. That same year, the PGA awarded Navarro a Lifetime Membership for 32 years of service and success.

“I was a good golfer and golf gave me everything I have. What more can a guy ask for?